Mark Haase grew up in Brooklyn Center with his single mother and siblings. He was a Boy Scout, Eagle Scout, and wilderness guide, and eventually the first in his family to attend college. He later joined the Coast Guard as a law enforcement officer, became a teacher and eventually an attorney.

Haase co-founded the Second Chance Coalition, worked for years at the Council on Crime and Justice, led bipartisan efforts to reform drug sentencing and juvenile records laws, worked to restore voting rights for former offenders and was a leader on the Ban the Box campaign. He is currently the Government Relations Director for Minnesota IT Services.

Commits to building police accountability and community trust through creation of a community advisory board and a conviction integrity unit to review possible improper convictions.
Source: Police Accountability on candidate’s website

Commits to creating an independent advisory panel for police use of force cases.
Source: Endorsement by Our Revolution Minnesota

“Interesting news out of California today as CA became 1st state to end cash bail. While not perfect, it’s a step in right direction. This will be a priority for me as County Attorney.”
Source: Twitter, 8/29/18

“People also need to know that about 50,000 Minnesotans living in the community can’t vote today, and we can change this law so that people can vote once in the community like in 18 other states.”
Source: Twitter, 8/14/18

On transparency: “As our next county attorney I will make it my highest priority to know what is going on in my own office, and throughout the justice system, make this information public, and lead in doing better.”
Source: Twitter, 8/20/18

Supports full legalization of marijuana: “Limit the prosecution of cannabis crimes, where racial disparities in enforcement are particularly high and support full legalization.”
Source: Endorsement by Our Revolution Minnesota

Critical of his opponent Freeman’s lack of knowledge or refusal to to admit to  racial disparities in Minneapolis Police Department marijuana sting operation: “When asked about the fact that 47 individuals were being prosecuted for felonies for low-level marijuana crimes, and 46 were Black, he said he didn’t know there was a pattern.”
Source: Twitter, 8/20/18

Commits to creating a community advisory board to address racial disparities in the criminal justice system.
Source: Star Tribune, 8/20/18

“As County Attorney I will work to enhance victim support services both inside and outside the office and work with domestic violence and sexual assault advocates to ensure we are truly hearing victims and doing all we can to hold perpetrators accountable.” Haase points to a Ramsey County study as an example to follow.
Source: Sexual violence prevention on candidate’s website

Commenting on Hennepin County Attorney Mike Freeman’s response to a Star Tribune story on sexual assault investigations and prosecutions: “When asked about the horrible rate of persecution for reports of sex crimes, he said he didn’t know it was that bad.”
Source: Twitter, 8/20/18 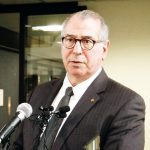