Outside of food activism, Redmond has worked for reproductive justice on the west side of Chicago, and was on the co-chair of the National Black Women’s Health Project – Chicago Chapter. Her activism has also touched gun violence, and Redmond assisted in the development of the Chicago Project on Violence Prevention (now known as CureViolence).

Redmond has been recognized as a Responsibility Pioneer in 2009 by Time magazine. She received the Green for All Fellowship in 2007 and was a WK Kellogg Food and Society Fellow from 2003 – 2005. She has curated a theatrical performance called SOUL Food Monologues. She hosts a radio show that celebrates the legacy of Prince on KRSM and a health program on KMOJ.

Redmond is the Diversity and Community Engagement Manager at the Seward Community Co-op.

“The history of America is filled with instances of state-sanctioned violence used to push the agenda of white supremacy – the extraction of resources for the purposes of wealth creation.”
Source: Minnesota Women’s Press

“There’s some things that, if I was county commissioner, that I would want to stop the county from doing. In this current budget, that has been approved by the county commissioners, there’s 50 beds for women … When I talk about mass incarceration, I’m talking about the expansion of prison beds. That’s a no. And those beds are for immigrants. They’re for immigrants, they’re for indigenous people, they’re for black and brown people. So the expansion of the prison-industrial complex has to stop. The privatization of that complex has to stop … We have to divest from mass incarceration. We have to build housing as opposed to building more jails. We have to begin to think more about our people than incarcerating them.”
Source: ISAIAH Hennepin County District 3 Candidates Forum, 5/8/18

“The current county budget is focused primarily on public safety/law enforcement rather than public health. For example, the current county budget has $3.7M Dollars in corrections and jail upgrades. These are funds that should be shifted into public health. AS county commissioner, I propose that the county should begin to triage 911 call and begin to send out mental health teams that can deescalate crisis where there is not threat to public safety and no weapon involved.”
Source: Twin Cities Transit Riders Union Candidate Survey

“Food justice means … making sure our immigration policies are fair to those harvesting our food …”
Source: Twin Cities Daily Planet, 6/4/13

“The need for cheap labor to work in the developing agricultural plantation systems ushered in an era of slavery — the trafficking of Africans to the Americas. Today a modern form of slavery exists still, where immigrants are the cheap labor needed to make sure tomatoes are picked.”
Source: Civil Eats, 1/15/09

“I believe that co-op housing is the way forward for public housing. Low income residents must be protected by the county. Co-op housing can be a way to share ownership with residents. In a co-op housing situation, units are owned and controlled jointly by a group of individuals who have equal shares, membership, and/or occupancy rights to the housing. Co-op housing could allow residents a way to obtain housing that is affordable or below market rate. The financing could be a combination of income qualification and investment based on income, with city, Met Council and county funding. Legislation could also protect these units from being converted to market rate units or sold.”
Source: Twin Cities Transit Riders Union Candidate Survey

“To end homelessness the county must be invested in ending disparities and it is not. In fact, the current county budget, perpetuates disparities. Any county board of commissioners that has never had a person of color on it is not equipped to understanding the intersections of race, class and gender that create a condition like homelessness. There are several layers to homelessness: Homeless LBGTQ youth, homeless people w/children, homeless seniors and homeless people with mental illnesses. There are those that are struggling with chemical addictions. While they all need shelter that all do not need the same type of assistance getting to stable, affordable housing. I believe that if the county can support the develop of Target stadium and find support for other sports stadiums it can support the development of shelter and affordable housing to get ALL the homeless people off the street. There has to be more shelter beds. Moving people from shelter beds to permanent housing requires more affordable housing and a pathway to work and education. It also requires food. It requires more that 16 county supported treatment beds.”
Source: Twin Cities Transit Riders Union Candidate Survey

“In the Food Justice Movement African Americans are at the forefront of reclaiming vacant space and converting it to urban farm sites. One level of work is really expanding this notion of access to not just include people who are passive recipients of food, but enabling people to envision themselves becoming entrepreneurs again, being able to sell their produce and create a local food system that’s vibrant.”
Source: Twin Cities Daily Planet, 6/4/13

“Gentrification occurs before new development and new amenities arrives in neighborhoods. Those are symptoms of a deeper problem. Gentrification happens when land is rezoned and those that have a say in the zoning do not live in the neighborhood or are renters. The county can step into development and leverage equity and inclusion. I would advocate for rezoning to include agreement from a percentage of the renters (not just property owners). This effort would make developers and business take the next step in being transparent and being held accountable.”
Source: Twin Cities Transit Riders Union Candidate Survey

Signed open letter to Congress to support a healthy food and farm bill that puts the interests of taxpayers, citizens and the vast majority of America’s farmers first and foremost.
Source: The Atlantic, 6/5/12

Redmond first became involved in food advocacy when her son was diagnosed with a number of food allergies at a young age, and she soon discovered that healthy food that would accommodate his condition was hard to come by in her community. To facilitate her community’s access to fresh, healthy, pesticide- and GMO-free food, she launched an initiative converting vacant lots into urban farms.
Source: FoodTank, 9/13

“Equity and inclusion is my number one priority. I would also like to see the county work more on the establishment of a food system that is fair, just, and equal. I’m very committed to food justice, I have been for the past twenty years, as a mom and as an organizer, making sure that we have the best food system possible, making sure that everyone has enough to eat and those that can afford to buy food, that they are able to buy the very best food that enhances our environment and supports our earth.”
Source: ISAIAH Hennepin County District 3 Candidates Forum, 5/8/18

“My candidacy is about equity. What I’m running … with is an equity lens. And what I hope to have as a result of winning is equity outcomes at the County level.”
Source: Minnesota Spokesman-Recorder, 2/7/18 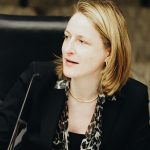