Rich Stanek has been Hennepin County Sheriff since 2007 and is running for a fourth term.

He has worked in law enforcement for thirty-five years, including in the Minneapolis Police Department. He served five terms in the Minnesota Legislature as the Republican representative for Maple Grove and was Chair of the Crime Prevention and Public Safety Committee from 1999 to 2001. In 2003, Governor Pawlenty appointed him Commissioner of Public Safety and Director of Homeland Security for Minnesota.

Stanek grew up in Northeast Minneapolis and has a criminal justice degree from the University of Minnesota and a master’s degree in public administration from Hamline University. He lives in Maple Grove with his wife and children.

As a state legislator, Stanek authored a bill in 1999 called the “Stanek Residency Freedom Bill” that prohibited municipalities in Minnesota from requiring residency for employment for all workers, including police, and that was signed into law. This removed the Minneapolis Police Department’s then residency requirement for new hires.
Source: MinnPost, 12/3/14

Hennepin County was chosen as a site by the U.S. Department of Justice to implement the U.S. Commission on Civil Rights recommendations to improve police-community relations. According to Stanek and paraphrased by MinnPost, “so far, … their department has reformed their training and education programs to include more cultural diversity and community engagement, implemented new data release practices to make their department’s information more accessible to the public, and developed a more clear-cut and structured use-of-force policy. Later this spring, Hennepin County will begin to roll out their body camera program.”
Source: MinnPost, 3/24/17

Stanek developed the Sheriff’s Community Engagement Team, which “consists of sheriff’s office personnel, including Sheriff Stanek, who meet regularly with residents from diverse communities” and
“discuss[es] crime prevention and public safety issues, as well as how to build trust between residents and law enforcement.”
Source: Hennepin County Sheriff’s Office Initiatives as Sheriff

In a meeting with President Trump at the White House and in response to the president’s statement, “And you do have a big problem with the refugees pouring in, don’t you?” Sheriff Stanek responded: “Yes we do, sir. And all we’re asking is what you’re doing, which is let the courts decide, do what we’ve been doing. The rule of law is strong and the proper vetting of individuals is really important to us.”
Source: Kare 11 News, 2/7/17

In a September 21, 2017 letter to Mayor Betsy Hodges and Minneapolis City Council, Stanek stated: “There is no sanctuary for criminals anywhere in Hennepin County. … We do not assist ICE in this process, but we do cooperate with ICE officers to the fullest extent of the law. If an arrestee voluntarily discloses that they were foreign-born, or a non-U.S. citizen, Hennepin County Sheriff’s Office makes this information available to ICE, arranges a call to ICE and offers the arrestee the option of speaking with an immigration agent. In 2016, we arranged approximately 2,700 of these phone calls, and the majority of the calls resulted in inmates voluntarily speaking with ICE agents. For most (80%), this call assisted them in resolving questions concerning their legal status.”
Source: Letter from Sheriff Stanek, 9/21/17

Stanek refused to report on activities in coordination with ICE, including questioning detainees on citizenship status, after receiving a request for “clarification and transparency” from Rep. Keith Ellison. Among the eight questions asked: “Hennepin County is estimated to have spent nearly $1.5 million on detaining undocumented immigrants in 2015 alone, according to the National Institute of Corrections and the Department of Justice. What is the estimated overall cost of HCSO staff time spent assisting ICE and other federal agencies with federal immigration enforcement for the current fiscal year?”
Source: Letter from Rep. Keith Ellison to Sheriff Rich Stanek, 7/20/17

“Stanek’s office does not honor requests to hold inmates longer for immigration agents. But it does alert Immigration and Customs Enforcement when deputies book foreign-born inmates, among other assists. Such practices spend county resources to do the feds’ bidding and undermine trust in immigrant communities, say a county commissioner, the Hennepin public defender’s office, and immigration attorneys and activists.”
Source: Star Tribune, 7/9/17

“The Hennepin County Sheriff’s Office was the first law enforcement agency in the state to equip officers with naloxone [Narcan] since a 2014 state law permitted it.”
Source: MPR News, 5/1/18

On the issue of people with diagnosed mental illness being held in county jails: “Hennepin County Sheriff Rich Stanek said top DHS [Department of Human Services] officials, including the acting commissioner, should be held in contempt of court for ‘failing to uphold their duty’ under state law.” DHS officials disputed this claim, noting the shortage of psychiatric beds and the failure of sheriffs to transport people within the required 48 hours of court determination of mental illness.

In an opinion piece following the school shooting in Parkland, Florida, Stanek called for school resource officers to be trained and equipped with guns, more safety drills and weapons screenings at schools.
Source: Star Tribune Opinion Exchange by Rich Stanek ,2/28/18

Stanek resigned under pressure as Minnesota Public Safety Commissioner in 2004, after his admission in a police brutality case of making racial slurs as a Minneapolis police officer 12 years earlier was made public. It was one of three police brutality cases brought against him during his service with the Minneapolis Police Department. Governor Tim Pawlenty said, “The reason we’re taking the action today in mutual agreement with Rich is that the person who holds this position has to have the public’s trust and confidence. Even if there are questions – legitimate questions – regarding someone’s views regarding race relations or racial insensitivities that impedes that person’s ability to be effective in this job.”
Source: MPR News, 4/16/04

In 2015, the Sheriff’s Office reported a 27 percent increase in violent crime in suburban Hennepin County, compared to a 2.5 percent increase in Minneapolis. “Sheriff Rich Stanek attributed the suburban increase to the diversification of the county’s population, which he said has put immigrants who may be more vulnerable to crime in more cities outside Minneapolis.”
Source: Star Tribune, 9/5/15

“Instances of police misconduct, racism, intimidation and harassment are disturbing and should never be tolerated. Generally speaking, we have not had these issues in the Hennepin County Sheriff’s Office due to our commitment to training and effective community engagement, as well as our commitment to providing meaningful supervision and discipline when warranted.”
– Rich Stanek’s response to a question on racial disparities in the treatment of people of color by law enforcement, 2014 candidates Q & A
Source: Neighborhoods Organizing for Change questionnaire, 10/30/14 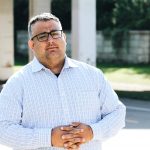