Bob Fletcher is a former Ramsey County Sheriff, and currently mayor of Vadnais Heights. He has been in the St. Paul police force since 1977 and was elected to the office of sheriff in 1994, serving for 16 years until losing the election in 2010.

Fletcher returned to the St. Paul Police Department in 2011 and retired in 2013 to become a city council member for Vadnais Heights and mayor in 2016. He also works as a counter-terrorism instructor working to prevent radicalization of Minnesota youth.

Fletcher is a long time volunteer with youth sports teams, and he also enjoys traveling throughout Minnesota with his family.

Initiated the Metro Gang Strike Force as Ramsey County Sheriff, which came under FBI and state investigation for mishandling of resources and lax financial controls. Said Fletcher: “But rest assured that those 30-some guys on that gang strike force are some of the hardest working cops that I have myself worked with over the years, and I have worked firsthand with a lot of them … These are some of the best cops that we have in the state of Minnesota. Are there things they could do better? Absolutely. I’m telling you, they’re not bookkeepers. They’re good cops.”
Source: MPR News, 5/27/09

“I can tell you that the stress factors on children in the Somali community are no different than they were in the Hmong community or, for that matter, in any other part of America. If a child does poorly in school they lose self-esteem. … They’re going to look for other alternatives. … In the Somali community, gangs have been a concern, but other kids have chosen to fulfill their self-esteem needs by being part of Jihad.”
Source: Comcast Newsmakers, 12/5/17

“I always say success is the best vaccine against terrorism. If we help these kids succeed they have no reason to get involved in terrorism.”
Source: Comcast Newsmakers, 12/5/17

“We need to modernize our jail system. It doesn’t work because we want people to come out healthier than when they went in. We want them to get mental health services, we want them to get chemical abuse and chemical addiction services … we want to make sure we’re helping offenders improve their lives whether it is training, chemical addiction treatment, or mental health services.”
Source: Yia Michael Thao Show, Twin Cities Hmong Television, 9/7/18

“Last year all the sheriffs and correctional officers working in the jail, signed a petition, 70% of them were a vote of no confidence because management is so poor. I expect to professionalize that management. That’s a top priority.”
Source: Yia Michael Thao Show, Twin Cities Hmong Television, 9/7/18

“We had a number of Hmong immigrants that were having difficulty raising their children, their kids were joining gangs, and they didn’t really know how to parent in the American style. So I worked closely with the community to develop strategies to help kids succeed.”
Source: Comcast Newsmakers, 12/5/17 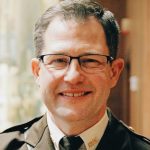